10 Bollywood Celebs Who Married The Not So Famous 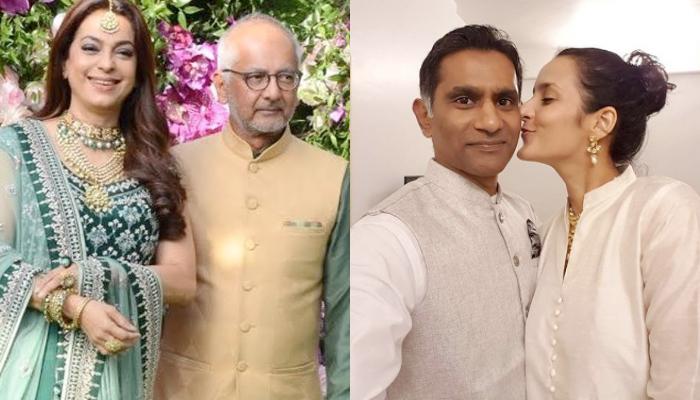 When a popular actor ties the knot with a popular actress, the paparazzi never leaves them alone to enjoy their personal space. Maybe that is the reason why many of our B-town stars have also walked on the same path, and have chosen their life partners from outside the tinsel town. And, they have successfully kept their personal life away from the media glare.

Check out a few famous celebs who married the ‘not-so-famous’ people.

After her relationship with actor Akshay Kumar came to an end, Raveena Tandon had to face a rough time both professionally and personally. However, the news of her marriage to film distributor, Anil Thadani was a big surprise to not only her fans, but for the film fraternity as well. Now, a mother of two, Raveena is back to her gorgeous shape. She is now seen judging many reality shows on television.

Also Read: When Akshay Kumar Had Confessed His Engagement To Raveena Tandon And Had Reacted To Marriage Reports

The ever-smiling and chirpy actress, Juhi Chawla, managed to keep her romance with the industrialist, Jay Mehta, under wraps, until they got married in 1997. The couple is blessed with a son and a daughter. Juhi is keeping her filmy career alive by working in selective roles.

Also Read: Juhi Chawla Reveals How She Feared Losing Her Career In 90s And Kept Wedding With Jay Mehta A Secret

The ever-young star of the yesteryears, Jeetendra started his Bollywood career in the late 50s and enthralled all with his energetic dance movements. Although there were rumours of him being infatuated with Hema Malini, he went on to marry Shobha. She was then working as an air hostess with British Airways. Their children, Ekta Kapoor and Tusshar Kapoor, are doing well in their own rights today.

Vivek Oberoi’s career graph has gone through huge ups and downs. An immature media statement dragged his career graph to an all-time low. After his marriage to Priyanka Alva, who is a daughter of a former Karnataka minister, Vivek seems to have finally settled down. They are blessed with a boy as well as a girl.

Recommended Read: 11 Bollywood Divas Who Became ‘The Other Woman’ And Led To Famous Divorces

The whole nation was taken aback when Madhuri Dixit announced her marriage with Dr Shriram Nene in 1999. The dhak-dhak girl broke millions of hearts when she took a hiatus from films after her marriage. Post-marriage, she got settled in Denver, the USA with her husband who is a cardiovascular surgeon. Now a mother of two sons, Madhuri was at the peak of her career when she married a person who was completely out of her super-stardom world.

Also Read: Love Story Of Shilpa Shetty And Raj Kundra, From Being His Second Wife To Having Two Kids Together

Well, this actress Esha Deol tied the knot with Bharat Takhtani, a Mumbai-based businessman in 2012. Way back Esha Deol had declared that she desired a husband as devastatingly handsome as her father, Dharmendra. The two fell in love years back when they were in their school uniform. But, the two reconnected ten years later and began dating again. Bharat truly believes that marriages are made in heaven. He says:

“It seems impossible that someone from a film family and I, who is from a conservative business family would ever come together.”

This young heartthrob of India made a mark for himself with his very first release, Jaane Tu Ya Jaane Na. He almost gave a heart attack to millions of his female fans when he first introduced his ladylove to the media. His better half, Avantika Malik, hails from a non-filmi background. The couple dated for 10 years before they decided to get married.

After 8 years of marital bliss, Imran and Avantika had temporarily decided to call off their marriage due to irreconcilable differences. According to recent reports, it is Imran Khan’s alleged extra-marital relationship with actress, Lekha Washington that led to his split with his wife, Avantika Malik.

Fardeen Khan, once a heartthrob of Bollywood too married his childhood friend, Natasha. The speculations regarding his affair with Celina Jaitley were all put to rest when he openly accepted his relationship with Natasha. Despite being the daughter of veteran actress Mumtaz, Natasha was never a known name in the industry.

The yesteryear beauty and style-diva, Mumtaz who enchanted her fans with her superb acting and dancing skills married a business tycoon, Mayur Madhvani. Many people thought that Mayur married her only for her looks and glamorous appeal. But, there came a time in her life, when she had no eyebrows, no eyelashes and no hair left because of cancer. Talking about their relationship, this is what she said in a magazine interview:

“I will never forget that he would hold me like a child and call me the most beautiful woman. I know what I must have looked like, but he made me feel beautiful.”

Indeed, a true example of how strong the bond of love and marriage is!

One of the good finds and super-gorgeous actress, who rose to fame through Mere Yaar Ki Shadi Hai. But despite her positive start of the career, she couldn’t make it to space. And then, she went on to try her fluke in South as well, but there too, things didn’t work out well for her. The actress took the wedding vows with Captain Vinod Nair, who now happens to be a strategist, author and entrepreneur. The exact date of their marriage is not known, but they truly are madly in love with each other. Bot Tulip and Nair are owners of Kimmaya Consulting, a million-dollar company.

These couples prove that love can happen anytime, with anyone, irrespective of their popularity or financial status. These jodis are a proof that marriages are made in heaven!

NEXT READ: Madhuri Dixit And Juhi Chawla Revealed The Reason Why They Didn’t Marry A Bollywood Actor