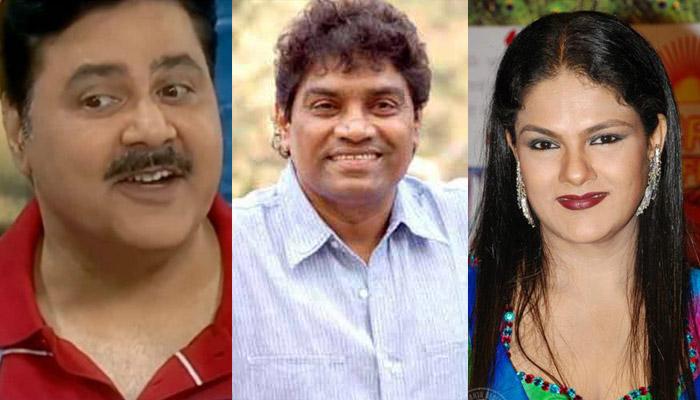 Bollywood masala movies are incomplete without a pinch of comedy. These popular Bollywood comedians have never failed at making us laugh our heart out whenever they have appeared on the silver screen. Their punchlines, perfect comic timing and sense of humour, all these things have made even a mediocre movie worth watching.

We remember them for their perfect comic timings or for their signature dialogue, but how many of us know anything about their personal life, especially their spouses? Take a look at the following list of 20 popular comedians of Bollywood and their lesser-known spouses.

Johnny Lever is one of the finest comedians of Bollywood and every generation is a fan of his perfect comic timing and funny expressions. He married Sujatha Lever in 1984, in a Catholic wedding and considers his wife as the sole reason why he survived for so long in Bollywood. Together they have two kids, a son named Jesse and a daughter named Jamie (who is also a stand-up comedian).

Rajpal Yadav, known for his punchlines and dialogue delivery, is a popular Bollywood comedian who rose to fame with movies like Hungama, Kal Ho Na Ho, Mujhse Shaadi Karoge and Malamal Weekly. Rajpal has been twice lucky in love as this is his second marriage. Rajpal was earlier married to Karuna, who passed away while giving birth to their daughter, Jyoti, who recently got married to a cashier. After his first wife passed away, he went on to marry a Canada-based girl named Radha in 2003. He has a little daughter named Honey.

Also Read: Rajpal Yadav’s Daughter Jyoti Gets Married To A Cashier In A Lavish Ceremony

Who doesn’t know the ace comedian, villain and scriptwriter, Kader Khan? Born in Afgan and an ex-civil engineering professor, Kader Khan is a highly acclaimed comedian of Bollywood, whose presence in every movie was impactful. The 80-year-old actor is married to Azra Khan and together they have three sons and one of them named Sarfaraz Khan has also acted in a few Bollywood movies. His entire family is settled in Canada and the actor also holds Canadian citizenship.

Mehmood is a legendary comedian who is known for his antics. He sang, he danced and he acted, whatever he did on-screen made the audience laugh. With his unmatched comic timing, he bought a new meaning to comedy. He was married twice and his first wife was Madhu, who was a popular actress, Meena Kumari’s elder sister in 1953, but divorced her in 1967. He later went on to marry an American actress named Tracy. He has four sons from his first marriage and two sons and a daughter from his second son.

Sanjay Mishra, better known for his role in the Golmaal series is one of the finest actors in Bollywood who do comic roles with so much ease. He is known for his comic roles in various noteworthy films. After his first marriage failed, he was skeptical about marrying for the second time, but after being insisted by his family, he decided to give marriage and love another chance and got married to Kiran in 2009. The two are happy in their married life with two daughters named Pal and Lamha.

Javed Jaffrey, the multi-talented actor, dancer, choreographer, VJ, and filmmaker is also a much-loved comedian. The son of the famous comedian of his time, Jagdeep, Javed married twice, once to famous Bollywood and Pakistani actress, Zeba Bakhtiar and then to Habiba Jaffrey. Javed and Habiba are blessed with three super-talented children named Alvira, Mizaan, and Abbas.

Govardhan Asrani, popularly known as Asrani is a veteran of Bollywood, known for his comic timing. He started doing comedy in Bollywood films from 1966 and it has been almost 5 decades that he is making his fans laugh. Asrani married yesteryears actress, Manju Bansal. The couple met on the sets of Aaj Ki Taaza Khabar and Namak Haraam, and fell in love while working together. The couple is blessed with a son named Naveen, who is a dentist by profession.

Vir Das is a popular Bollywood actor, known for his one-liners and punchlines in various hit movies. The actor-comedian is happily married to his girlfriend of five years, Shivani Mathur since 2014. The couple got married in a secret beach wedding in Sri Lanka.

Recommended Read: 6 Bollywood Celebrities Who Got Married Not Once, Not Twice, But Thrice

The famous Bollywood comedian and supporting actor, Ashok Saraf is fondly remembered for his role as Anand Mathur in Hum Paanch and head constable Savalkar in Singham. He is happily married to actress Nivedita Joshi-Saraf. They have one son named Aniket, who is a pastry chef by profession.

Tiku Talsania is a popular name in the Bollywood and television, known for his funny expressions and comedy. He is known for his comedy in movies like Ishq, Hungama, Duplicate, Dhol, Special 26 etc. Tiku is married to Dipti, who is a popular theatre artist as well as a classical dancer. He has a son named Rohan and a daughter named Shikha Talsania, who is also an actress.

Satish Shah, better known as Indravadan Sarabhai from Sarabhai Vs Sarabhai is an actor and comedian par excellence. He is known for his roles in Hum Saath Saath Hain, Main Hoon Naa, Bhootnath etc. and is happily married to Madhu, whom he met during a film festival. The couple tied the knot in 1982 and his luck changed immediately. His wife, Madhu brought luck into his professional life as post-marriage he started getting a lot of movies.

Uma Devi Khatri, better known as Tun Tun is the first ever female comedian of Bollywood who was loved by one and all. The veteran comedian died at the age of 80, in 2003. She married twice, first to a man named Akhtar Abbaz Kazi in 1947 and then to her second husband named Mohan. She is survived by her four children and four grandchildren.

Must Read: 10 Superstars Of Bollywood Who Got Married Before They Became Famous

Boman Irani is an actor whose acting skills are beyond perfection. Known for portraying various character roles and comic roles, he did his first film at the age of 41, proving that age is just a number to start anything new in life. He saw his wife Zenobia Irani at his bakery for the first time and fell in love. The couple got married in 1985 in a Parsi-style wedding. The couple is blessed with two sons named Danesh and Kayoze Irani.

Paresh Rawal is one of the most versatile actors of Bollywood who does both negative and positive roles with finesse. He has done various movies, playing the role of a villain and comedian. If we talk about Paresh Rawal and his superb comic timing, the first movie that comes up in our mind is Hera Pheri. The veteran actor married his ladylove, ex-Miss India, who also represented India in Miss Universe, Swaroop Sampat in 1987, after dating for more than a decade. His better-half is also an actress who was last seen in Ki And Kaa as Kareena Kapoor Khan’s mother. The couple is blessed with two sons named Anirudh and Aditya.

Also Read: Married To The Ex-Miss Universe, Paresh Rawal Saw Swaroop Sampat For The 1st Time And Lost His Heart

An Indian film and television actor, known for his amazing comic timing, Deven Verma is known for his notable work in movies like Angoor, Judai, Chor Ke Ghar Chor etc. He married Rupa Ganguly, daughter of late veteran Bollywood actor, Ashok Kumar and sister of Preeti Ganguly (another famous comedian). Deven, who worked with Ashok Kumar in many films, fell in love with his daughter Rupa and it took the couple two years to convince Ashok Kumar for marriage.

He was India’s first and most-loved comedian who appeared in many Bollywood movies. His antics made us laugh till our stomachs started to pain. After doing some 300 films, he is best remembered for doing some of the most iconic roles such as the tel-maalish-wallah, Abdul Sattar; the pickpocket master, the hilarious Isa Bhai Suratwala, etc. Johnny Walked tied the knot with Noor Jahan, who did a few films before becoming his wife. Johnny married Noor, who was better known as Shakila’s sister. The lovely couple appeared in Guru Dutt’s film, Aar Paar. The two were blessed with a son named Nabil and a daughter named Tasneem.

Also Read: 8 Bollywood Actresses Who Made Us Believe That Age Is No Bar For Marriage

Known was his epic comic dialogues, and playing a comic character in almost 400 films, Jagdeep is touted as one of Bollywood’s best comedians of all time. Jagdeep married twice, once to Sughra Begum and then to Nazima. He has three kids, two sons Naved and Javed from his first wife and a daughter named Muskaan from his second wife.

He is a popular Bollywood and television actor, known for his comic roles in Office Office, Singh Is King, Jolly LLB, Dil Dhadakne Do, Dabangg 2, etc. Manoj is happily married to his Hum Log co-star, Seema Bhargava Pahwa, better known as Bhadki. She is also a popular Bollywood and television actress, known for movies like Bareilly Ki Barfi, Shubh Mangal Savdhan, Dum Laga Ke Haisha, Wazir and All Is Well, etc. The lovely couple is blessed with a son named Mayank and a daughter named Manukriti.

Must Read: 26 Lesser Known Bollywood Celebrities Who Are Related To Each Other

One of the finest female comedians of Bollywood and small screen, Guddi Maruti is known for her roles in movies like Dulhe Raja, Shola Aur Shabnam, Balwaan and Biwi No. 1, etc. She was last seen in hit TV serial, Doli Armano Ki. She is married to a businessman named Ashok and the two are happily living in the posh locality of Bandra, Mumbai. She took a sabbatical to start a family but had problems conceiving.

Vinay Pathak, best known for his role in the hit comedy, Bhej Fry, he is an actor with a believable humour that makes one laugh, without trying too hard. The popular actor is married to Sonika Sahay and they have two daughters together, named Vasudha and Sharinee. The couple met for the shooting of an ad film and got married in 2001 after dating each other for a brief time. But, their marriage didn’t last for long, the couple parted ways and filed for divorce in 2008.

These comedians make everyone laugh with their funny jokes and antics and their wives are the inspiration behind their on-screen humour. They consider their better-half as their pillar of strength and constant companion, through all ups and downs!