Gauri Khan had posted a picture of Suhana Khan wearing a co-ord set on her IG handle from their vacation in Serbia and it costs less than Rs 3,000. 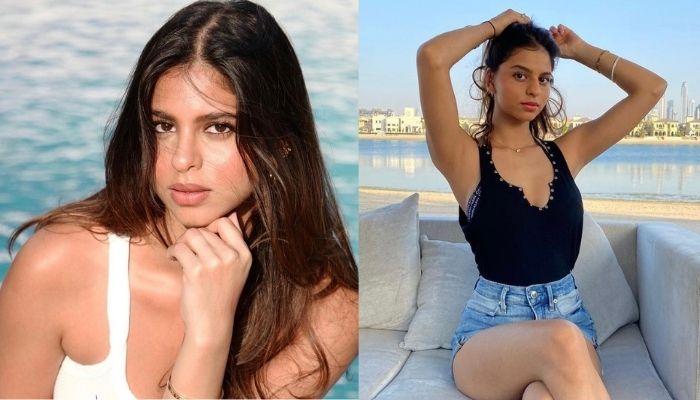 Shah Rukh Khan and Gauri Khan’s little princess, Suhana Khan has grown into a fashionista. Just like her star parents, this star kid also enjoys a huge fan base, owing to her grace, poise, good looks and talented genes. When it comes to fashion, she looks nothing less than a luxury. We believe the song, “I’ve got it all, Jimmy Choo & Manolo, Prada, Galliano, Cant get nuff, I want more and more..” perfectly sums up Suhana Khan’s wardrobe.

The 21-year-old, Suhana Khan often makes it to the headlines for her stunning fashion choices. On May 23, 2021, Suhana had shared a picture from her 21st birthday party on her Instagram handle, and her look was breathtaking. For her birthday, Suhana had opted for a halter and a keyhole neckline mint green corset style dress and had kept her tresses open. She had completed her look with a matching purse. Though the dress had cost her around £ 35 (Rs.3600), it was the Brushed Leather Prada bag that came at a cost of £ 1,200 (Rs 1,23,749).

Suhana Khan’s OOTDs speak all about luxury. However, this time, we are stunned as Suhana’s co-ord set costs less than Rs 3,000. A few days back, Gauri Khan had shared two pictures on her IG handle from Serbia. While one picture was of Gauri, who had opted for a casual look with shorts and sneakers, the other picture was of Suhana, and she had flaunted Bohemian vibes. Suhana had donned a printed co-ord set from Stradivarius.

Talking about Suhana Khan’s outfit, she had opted for a thigh-high slit skirt, which had buttons on one side, and a knotted blouse. While the outfit looked expensive, it actually costs less than Rs 3,000. According to Zoom TV, the skirt costs Rs 1,740 and the blouse costs Rs, 1,141, making the cost of the total outfit Rs 2881 only.

A few days back, Suhana Khan had posted a picture on her IG handle with a black cat, as she had clicked a selfie. Suhana had worn a beige coloured crop top with grey joggers and had styled it with a blue cap, leaving her hair open. She had kept her makeup minimal, peachy and dewy. Sharing the picture, she had written, “Cat lady.”

Though Suhana’s look was minimal, her royal blue baseball cap had stolen all the attention. Suhana was flaunting Gucci’s Royal Blue New York Yankees Patch Baseball Cap in her picture. The cap had a moth embroidered at the side, along with Gucci’s logo emblazoned in red. The cap was priced at a cost of $530, which converted to Rs. 39,340 approximately.

In February 2021, Suhana Khan had shared a picture from an indoor party looking classy. She had chosen a beige crop top for the party and had matched it with a high-waist pencil skirt. She had accessorised her outfit with a pearl necklace and hoop earrings. Adding a shimmery pink shadow to her eyes, she had completed her look with a lipstick of the same shade.

Well, when it comes to fashion, Suhana Khan is totally the right kind of inspiration you need!