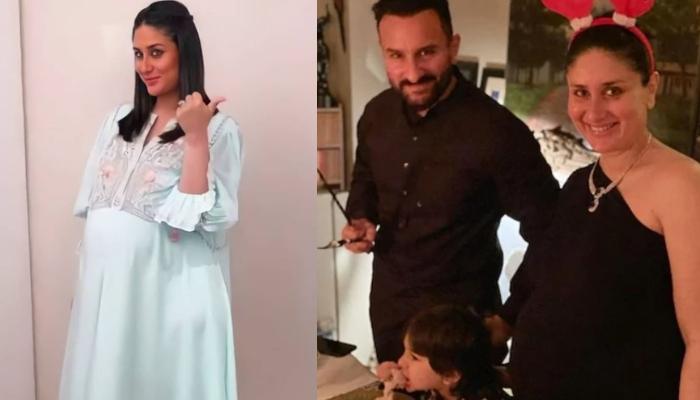 Kareena Kapoor Khan and Saif Ali Khan are tagged as the power couple of the glamour world. The stunning couple had tied the knot in 2012, but before being pronounced as husband and wife, Saif and Kareena had lived together. The apartment in Fortune Heights was their home from 2009 to early 2021.

The Nawab of Pataudi and his begum never miss a chance to share a glimpse of their royal life. In February 2021, Saif and Kareena had shifted to their new home, and since then, the diva has been posting glimpses of her new four-floor residence. On January 16, 2021, Kareena had taken to her IG handle and had shared an adorable glimpse of her new home. In the picture, we could see a beautiful door with Kareena’s cute family pictures hanging on the wall adjacent to it. Alongside it, she had written, “Door to new beginnings.”

A few moments back, we stumbled upon an unseen picture of Kareena Kapoor Khan doing griha pravesh of her new home. In the picture, Kareena, who was eight months pregnant, was seen boiling milk in the kitchen of her new home as a part of the griha pravesh puja. In the unseen picture, Kareena donned a blue kurta, mask with her hair tied back in a ponytail. Her baby bump was unmissable.

Darshini Shah, who had worked on styling Saif Ali Khan and Kareena Kapoor Khan’s new 4-floor residence in Mumbai, had spoken about her project in an interview with Khaleej Times. When asked, “How would you describe Kareena and Saif’s new residence in terms of the deco element and the overriding feel of the house?” Darshini had retorted, “Like them, it is classic, colonial and timeless.”

Recommended Read: Neena Gupta Recalls Her First Marriage With Amlan Kumar Ghose And Reveals Why It Ended In A Year

Darshini had also shared that Saif and Kareena love understated luxury and comfort. Speaking about the same, she had said, “Their love for England is well known and their home reflects that very English understated luxury. It also has a little bit of Pataudi, cricket, films, family photos and their lovely collection of art. It bounces off a slight Mediterranean feel from the many lights, mementos and art that the travel-obsessed couple have picked up on their many sojourns.”

In April 2021, Kareena Kapoor Khan had given a glimpse of the king-sized rooftop pool of their new residence, and it was nothing less than a paradise. Saif Ali Khan and Kareena’s bright blue pool was surrounded by black-and-white chessboard chequered tiles, some patio chairs and half wall and iron fence wrapped in bougainvillaeas that give the place a vibrant and cheerful vibe. Kareena had posted a picture on her IG stories with the caption, “Looking ahead and keeping faith”, and we spotted Saif, relaxing on a chair.

Also Read: ‘Dil Chahta Hai’ Turns 20: From Aamir Not Being The First Choice To Some Other Lesser-Known Facts

On the work front, Kareena will be next seen in Aamir Khan starrer Laal Singh Chaddha!